A new report shows Calgary’s luxury market is the top performer in all of Canada.

Of the 16 residential housing markets examined in the RE/MAX Upper End Report, Calgary was by far the strongest, with the number of luxury homes sold increasing by close to 50 per cent compared to the same period in 2012. According to RE/MAX, sales of homes priced at $1 million and up have increased from 115 during the first three months of 2012 to 172 during the same period this year.

“The luxury home market has been getting a lot of attention as sales have increased in the $1 million plus category,” said CREB® economist Ann-Marie Lurie. “While the sales levels have risen, it is also important to note that listings in this sector of the market have also been increasing, unlike the lower end of the market, indicating that consumers have choice in the market.”

A similar report released by Sotheby’s International Realty Canada, shows Calgary’s market for top-tier homes continues to outpace most of Canada, with demand largely by younger buyers, mainly in the 35 to 40 year old range.

Year-to-date sales of homes priced $2 million and up — the same price range singled out by the Sotheby’s report as the city’s “top-tier” — have doubled in 2013, rising to 18 from nine during the same period last year. 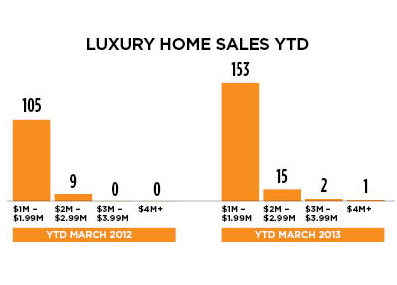 Unlike cities like Vancouver, where foreign investors make up a large contingent of luxury buyers, the Calgary market has the lowest overall percentage of foreign investment of the urban markets surveyed. According to Sotheby’s, 85 per cent of homes in Calgary priced $2 million or higher have been purchased by Canadians. Vancouver saw the highest percentage of foreign buyers, with 40 per cent of luxury single-family homes buyers hailing from outside of Canada.

Whether they’re from Canada or abroad, buyers willing and able to spend the money necessary to enter Calgary’s luxury market might actually be getting a relative bargain.

“If we consider only the size of the properties, one trend that is evident is relative to 2007 — which was the previous record for luxury homes — consumers are getting more home for the same money than they did during that period,” said Lurie.

Aside from the recent sale of former Calgary Flames’ captain Jarome Iginla’s 5,000 sq. ft. home in Elboya, which sold for $3.995 million after spending just one day on the market, the Calgary market has seen several high profile sales already this year. In March, a home in Aspen Woods sold for $10.35 million, marking the highest ever MLS® sale price in the city, topping the 2009 sale of former Flames’ goaltender Mike Vernon’s $10.3 million house in Elbow Park/Glencoe.

Pointing to overall sales levels in the city, which have increased by nearly 15 per cent despite a 6.5 per cent drop in listings, Lurie said buyers in Calgary’s luxury market are benefitting from the same factors present in other price points.

“Favorable mortgage rates, employment and migration growth have supported the growth in the entire housing sector. After the first quarter within city limits sales activity improved in all sectors where there was sufficient supply.”